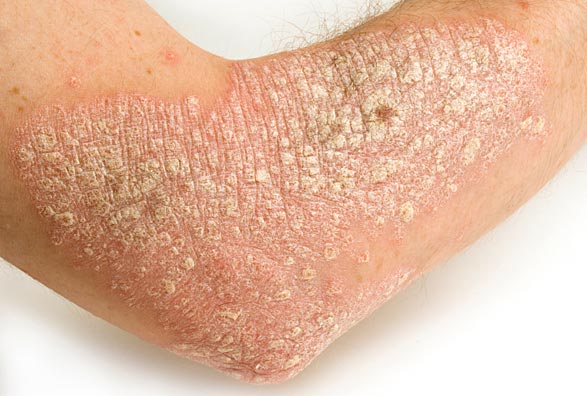 Skin complaints affect all ages from neonate to the elderly and cause harm in a number of ways. It includes 4D’s: Discomfort; Disfigurement; Disability; Death (in some cases). Skin is the organ that extends itself superficially and penetrates itself into the deeper levels of the body.

According to Ayurveda, any skin disorder occurs when there is an imbalance in the doshas and dhatus in our body. Two of the main causes of diseases that cause a vitiation of doshas are wrong diet and lifestyle. Following an incompatible diet (viruddhara or food items of opposite nature) or an incompatible lifestyle that is against the season or the prakriti (nature) of a person, causes the generation of toxins or poisons in our body. When these toxins accumulate in the body tissues, skin etc and contaminate them, skin diseases erupt. Though skin disorders are attributed to imbalances in all the three doshas, the prime dosha involved is pitha.

All treatments aimed at curing skin disorders emphasise on the complete penetrative and detoxifying abilities of the treatments rendered. The approach of Ayurveda to treating skin problems is by eliminating the root causes of the same; while Ayurvedic treatments may take longer to show results, the focus is on restoring complete health to the body. Main treatment line for all types of skin disorders mostly include cleansing (shodhana) treatments like vamana (Emesis therapy), virechana(Purgation therapy) and Rakhtamoksham. Apart from this, shamana oushadhis (oral medicine) are also administered for preventive and curative purposes.

The de-toxification therapies used to treat skin diseases are not only suitable for patients, but also for people without ailments. The Panchakarma Therapy helps maintain health, increase lifespan, reduce weight, tone and rejuvenate complexion and revitalise the mind, body and spirit.

The term eczema or dermatitis refers to distinctive reaction patterns in the skin which can be either acute or chronic. In Ayurveda, this disease is known as Vicharchika. Eczema is characterized by itching, dryness of skin, swelling, reddening, dryness, and flaking. Scratching of the skin results in rashes. It affects the ears, central face, nasolabial folds and eyebrows, armpits, umbilicus, breasts and groin. It also affects the scalp; when eczema affects the scalp, it is marked by scaling (dandruff). Eczema occurs in two types: Endogenous and Exogenous. Endogenous eczema is triggered due to certain processes originating in the body, while exogenous eczema is caused due to externally triggered factors. Eczema is triggered when the immunity of the body is impacted - the trigger may be caused due to various reasons like irritants (soap, shampoos, detergents, disinfectants, vegetables, meats), allergens (pets, pollen, dust mites), bacteria, hot and humid temperature, perspiration, food items (stale, spicy, fermented, fried, sour,dry food items),  stress and irregular schedules, excessive intake of items like tea, coffee, alcohol, aerated beverages.

Psoriasis is a non infectious, inflammatory disease of the skin, characterised by well defined erythromatous plaques with large, adherent, silvery scales. It is triggered as a result of increased epidermal proliferation due to excessive division of cells in basal layers. The disease is characterized by well demarcated lesions ranging from a few millimetres to several centimetres in diameters. The lesions are red with dry silvery, white scaling which may be obvious only after scraping the surface. The elbows, knees and lower back are the commonly affected areas. Scalp, nails and palms could also be affected.

Psoriasis can be caused due to many reasons. Some of the most common reasons are genetic predispositions, consumption of opposite foods (such as fish and milk/curd together, consumption of equal quantities of ghee and honey etc.), exposure of the skin due to cuts, bruises or burns and application or consumption of medicines/skin irritants. Additional causes could include excessive smoking, alcohol consumption and mental stress.

Acne is a skin condition in which excess production of oil from the sebaceous glands blocks hair follicles. This condition is most prevalent in teenagers - thus it is called Yauvanpidika in Ayurveda - yauvan referring to ‘adolescence’ and pidika referring to ‘pustules or papules’. It is also referred to as Mukha Dooshika (Acne Vulgaris) in the Ayurvedic language. Acne usually erupts in the form of black heads, white heads, pimples or nodules. The affected regions are mostly the face, back, upper chest and shoulders (areas densely populated with sebaceous glands). Skin is also often greasy in this condition. Inflammatory papules, nodules and cysts occurs and it leaves scar on face.

The main reason for acne is due to the vitiation of all the three doshas (vatha, pitha and kapha). The vitiated vatha dosha causes toxins to accumulate. The vitiated pitha dosha affects the rakta (blood) and meda (fat) tissues, causing inflammation. Excess Kapha, which controls the production of sebum, results in clogging of the pores. This combination of accumulation of toxins, inflammation and over-production of sebum creates conducive environment for bacteria over-growth, thus resulting in acne. Acne can aggravate due to bad food habits such as excessive intake of oily, spicy, salty and sour foods. It can also occur due to inadequate intake of water, irregular lifestyles, stress, application of skin irritants or excessive intake of caffeine, alcohol or tobacco.

Vitiligo (Leucoderma), called Kilasa or Switra in Ayurveda, is a pigmentation disorder in which the skin pigment cells (melanocytes or cells that create pigments in the skin) get destroyed. Owing to this, de-pigmented (white) patches appear on different parts of the body. Vitiligo generally affects the hands, wrists, knees, neck and back. It may also affect the mucous membrane and the retina. The hair of scalp and beard may also be de-pigmented. In this situation, hair that grows from the affected patches may assume a white colour.

With regard to what causes leucoderma, researchers suggest auto-immunological (condition in which the immunity system itself attacks the body), neurological or auto-cytotoxic causes. Also included in the list by medical experts are acute gastric disorders, calcium deficiency, burns, intra-lesional steroid injections, mental stress, impairment of liver, skin irritation due to wearing tight clothes, use of stickers or tattoos on the skin etc. Additionally, Vitiligo can be related to certain auto-immune and inflammatory diseases such as Thyroid, Diabetes, Psoriasis and Pernicious Anemia. Vitiligo may also be hereditary.

Eczema or Vicharchika is triggered due to the vitiation of the pitha dosha (the dosha representing fire). When an individual's lifestyle or diet is faulty, the initial impact is felt on the digestive system. Thus, the pitha dosha is aggravated. Due to the dosha imbalance, the ability of the body to get rid of the ama (toxins) is reduced. The toxins accumulate in the skin as an impact of the vitiated pitha dosha. This contamination of toxins in the body tissues is the main cause for eczema. Ayurvedic recommendations on treating eczema are based primarily on the lines of restoring the balance of the pitha dosha in the body. Treatments to pacify the pitha dosha stabilize the body's digestive system and eliminate the accumulated toxins. Thus, the treatments focus on detoxification and cleansing. Apart from this, other Ayurvedic remedies such as Udhwarthanam (massage with dry herbal powders), Lepam (face packs with natural or medicated herbs), Dhoopanam (medicated fumigation) are also effectively administered depending on the patients condition. Oral medication is also be prescribed where required.

According to Ayurveda, Psoriasis is triggered due to the vitiation of the vatha dosha (representing air) and the pitha dosha (representing fire). The imbalance of the digestive system vitiates the pitha dosha and impacts the ability of the body to eliminate toxins. These excess toxins are carried by the vatha dosha across the body.  When these toxins accumulate in and contaminate deep tissues like rasa (nutrient plasma), rakta (blood), mansa (muscles), and lasika (lymphatic), Psoriasis is triggered.

Ayurvedic treatments focus on purification of blood and tissues. The main aim of the treatment is to eliminate the toxins from the body and restore the balance in the digestive system. To ensure strengthening of the tissues and complete healing of the skin, nourishing herbs are used and administered. For vatha dominated psoriasis, treatments such as Snehana (oral administration of medicated ghee/oil), steam bath, Virechana (purgation performed by giving medicated laxatives),Vamana (medicated vomiting) and vasthi (medicated enema) are administered. For pitha dominated psoriasis, treatments such as Snehana, Dhara (with medicated butter milk or decoction) or medical purgation are administered. As Psoriasis is a chronic disease, there is a possibility that the vitiated doshas affect deeper tissues or channels. Thus, it becomes crucial to nourish and revitalise the skin after treatment. For this, multiple rejuvenation techniques and treatments are used.

A multi pronged approach is used to treat acne. The first one focuses on balancing your diet and improving your digestion. The second one focuses on eliminating the toxins from your body by purifying your blood. Also, measures are taken to purify your liver and digestive system to ensure that the condition is not recursive. Ayurvedic treatments to cure acne include steam (to unblock the channels),virechana (purgation performed by giving medicated laxatives),vamana (medicated vomiting to clear toxins and unblock clogged channels),rakthamoksham (blood-letting). Apart from these treatments, medicated and natural herbs are used (in the form of lepams or oral intake) to treat acne.

Ayurvedic Treatments for Vitiligo or Leucoderma

In Ayurveda, Vitiligo is caused due to the imbalance of all the three doshas (Vatha, Pitha & Kapha) vitiating the Rakta Mamsa and Medhas dhatus. Consumption of incompatible food items (virrudh ahaar sewan) results in formation of toxins int he body. These toxins disturb the immune system, causing the pigment producing melanocytes cells to degenerate. Ayurveda predicates a four pronged to treat Vitiligo: 1) Nidana parithyaga (avoidance of all causative factors); 2) Shodhana Chiktsa(intense detoxification through Panchakarma in which treatments such as Vamana, Virechana and Rakthamoksham are administered); Shamana Chikitsa (administered thorough oral medications and external applications) and 4) Pathya (following the correct lifestyle and food habits, including yoga and meditation)